Inside the cavernous London Newcastle Project Space at 28 Redchurch Street, Shoreditch, entrepreneurial duo Rob Dunne and Victor Frankowski demonstrated their charismatic charm for doing things differently. The proprietors of the Protein coffee shop on Hewett Street – HQ of their creative coffee consultancy DunneFrankowski – had set the stage for two-days of captivating competition. Their trademark collaborative approach resulted in a purpose-built gallery space that was just as much a salute to the explosive growth of speciality café culture in the capital as it was about the event’s main attraction; the professional Barista. 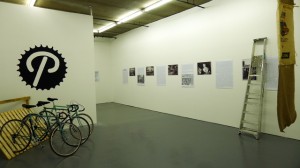 Articulating their vision for the space, they said: ‘By building partitions within the gallery we wanted to create a unique environment for the competition and wider audiences to give them an insight into the speciality coffee industry and the craft which barista’s try to master. Collaborating with Monorex to design unique pieces for the partitions, our aim was to link different sub-genres in the art world which otherwise would no be seen together’.

I arrived early on a cold January morning to meet Vic and Rob carefully arranging a series of panels that detailed the rise of the London coffeehouse ever since the first establishment opened its doors to the public on St Michael’s Alley, Cornhill, in 1652. 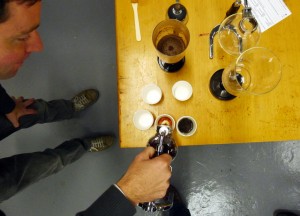 Meanwhile, the good folk at Union Hand Roasted Coffee were setting up their brew bar. As they arranged their siphons, aeropresses, Hario V60 pour-over’s and adventurous single-origin coffee menu, a huddle of competition judges deliberated in hushed, well-intentioned tones.

One wall featured the playful but perceptive work of artist and cross-county runner, Sarah Peterson, who had been commissioned to create a stylised set of illustrations satirically entitled – Top Ten Tips for Overcoming Coffee Addiction. Brilliant.

Two San Remo Veronas occupied opposing tables in the competition area and a third flagship Roma TCS model was being lovingly set up in pride-of-place to greet visitors at the entrance to the gallery. A cosy café space to accommodate the coffee-loving public partitioned with coffee sacks sewn together provided the final understated flourish to the welcoming atmosphere.

The stage was set. Over two days, twelve Barista’s were to put their craft to the test under the watchful eyes of six UKBC (United Kingdom Barista Championship) judges and a packed out room for a coveted place in the semi-finals due to take place at the London Coffee Festival at the OId Truman Brewery on 28th April, 2012. The following day is the climax of the UK championship and an opportunity to compete in the World Barista Championships in Vienna later this year. Take it through to its most logical conclusion and you have the equivalent of a Saturn V rocket strapped to your reputation in the coffee stratosphere. In short, it’s high stakes stuff. 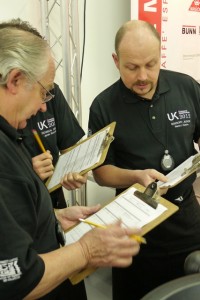 Organised by the Speciality Coffee Association of Europe, the UKBC rules stipulate that each Barista gets 15 minutes to prep their work area and then 15 minutes to make four of their best espresso’s, cappuccino’s and espresso-based ‘signature’ offerings. It’s a chance for the Barista to showcase their knowledge of coffee, creative flair and split second judgement. Aside from the critical aspects of taste and technicality, the competition is just as much about presentation as it is for the business of pulling a great shot. Their performance is judged under the close scrutiny of two technical and four sensory judges.

Okay, I am no expert but I thought all the competitors set the bar extremely high. The competition is a true testament to the Barista’s creativeness when it comes to approaching hand-crafted signature drinks.

The award for theatricality had to go to Dennis Tutbury, Head Barista at the Canary Wharf branch of Taylor St Baristas, who invited the judges to an Alice in Wonderland-inspired tea party: `Because of the tea notes in the coffee, we thought it would be cool to serve them in vintage tea cups. I wanted do something really interesting – something that I would like to watch as part of the audience. You create the experience, and the environment you set up makes all the difference’, he said. 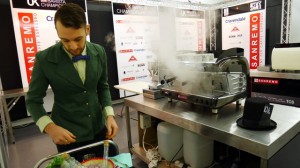 Prepared in quintessential Mad Hatter attire, Dennis’ signature drink was an ice cube infused with Earl Grey tea added to a single shot espresso. He added: ‘As the coffee is so light and delicate, I thought it would be nice to strip it all back to enhance the flavour with the ice cube cooling down the espresso – I really liked the taste. Serving it in small tea pots just added a really nice touch to it.’

Another stroke of genius was at the experienced hands of Rummy Keshet, who selected an award-winning coffee grown at 900m in Araku Valley, Southern India; a London début? He chose the bean for its savoury flavours, full body, delicate acidity and spicy notes. Shortly before the news of winning third place in the competition, he said this of his signature drink:

‘A Scottish food scientist called Harold McGee wrote twenty years ago that coffee is the most similar flavour profile to corn. I thought that sounds like fun. So I made popcorn, cooked it with milk, filtered it out and there you have it – popcorn-flavoured milk! When I poured it over the coffee, to my surprise, they integrated amazingly well.’

The 24 year-old Barista trainer for Darlington’s went on to describe how the combination of caramel and salted popcorn took him back to his childhood: ‘I added French sea salt to the bottom of the espresso, used a syringe to add the right amount of caramel followed by the steamed popcorn milk, served as a piccolo. The salt is really important because it creates a glue between the coffee and popcorn – it brings out the savoury flavours and mutes the coffee’s acidity. The caramel binds the milk and the coffee together. I like to make mainstream, quirky.’

But it was Sang Ho Park, from South Korea, who swept the board with a polished performance and superlative signature offering that would not be out-of-place in Heston Blumenthal’s kitchen. Despite being the last word in modesty regarding his own performance on the day, his efforts scooped him the number one spot. 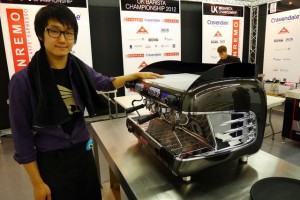 The 22 year-old Tapped and Packed Barista commented: `My espresso predominantly has a lot of mango flavour, tropical fruits and honey sweetness – I wanted to accentuate those flavours. The fresh mango and acacia honey went really well together and the pomegranate gave it tropical notes. I experimented with salt to make the sweetness come out which complimented the brightness of my coffee. A small amount of diluted vinegar gave it that ting on the tongue and so I added natural fructose to mellow it out’. His skills clearly won the judges appreciation because Sang Ho went on to score a hat-trick by taking the prize for the best espresso, cappuccino and signature drink.

In spite of the enormous pressure, what struck me was the behind-the-scenes camaraderie amongst the competitors, crew and caffeine-heads who rocked up to support their star Barista. It summed up the friendly, collaborative spirit of the vibrant speciality coffee community perfectly. Over the course of two days, funds were also raised for international NGO Coffee Kids to improve the lives of farmers and their families through community-led initiatives. A worthy cause fit for a worthwhile competition.