Born in the Oromia town of Warra Jarso, 175kms north of the capital Addis Ababa, Abiyot Shiferaw was brought up with his two sisters and four brothers in a happy family environment. Like all Ethiopians, they celebrated special occasions by holding a traditional coffee ceremony. From an early age, Abiyot had a strong sense of fairness but saw injustice all around him. He saw how his fellow countrymen and women did not have access to clean water or could not pay for basic medical treatment. He observed how children were denied an education because their parents couldn’t afford to send them to school. He witnessed state-sponsored corruption at the hands of government officials and the police.

And his struggle for human rights, fairness and justice nearly cost him his life.

‘There were political problems in the school’, he says, ‘thirty-seven students including myself were arrested one day for being members of the Maccaa-Tulama Association, a civil society group in the Kuyyu Distinct banned by the Ethiopian government in 2002. The organisation was seen as a threat to the government’s political wishes. We were arrested without any reason or proof that we had done anything wrong’.

Abiyot was imprisoned for three months during which time his family were prevented from visiting him. He was eventually accused of being affiliated to the Oromia Liberation Front (OLF), a rebel group who are still fighting for self-determination.

‘We were investigated but there was no evidence,’ he adds.

After being released, Abiyot studied law in Addis Ababa and was later employed by an Oromo law firm. He says he found it almost impossible to act in the interests of his clients as a result of excessive police pressure or government administrators to exact a favourable verdict: ‘It was very difficult to apply the law independently. In the end, I realised that I couldn’t undertake my duties to represent the people fairly and decided that I could no longer continue’.

But the bloody aftermath of the 2005 national elections where hundreds of people lost their lives in protest was a turning point for Abiyot. He successfully ran as a candidate for the Oromo Federalist Democratic Movement (OFDM) and was elected to represent his home town constituency in the federal parliament. The sweet taste of success soon turned sour when the national election results were called early by the incumbent alliance, the Ethiopian People’s Democratic Revolutionary Front, and a state of emergency was declared.

In response to the public unrest that followed, public gatherings were outlawed and Prime Minister, Meles Zanawi, assumed direct command of the security forces, replacing the capital city police with Special Forces drawn from elite army units. Reports of massive human rights’ violations across the country were reported by international observers. ‘The election was stolen’, says Abiyot, with the zeal of a political activist; ‘the government was defeated. They did not win one seat in the capital but described themselves as the outright winner. The government should listen to the people’s voice’.

Shortly after the election, plain-clothed security police arrived at Abiyot and his friend’s residence in the dead of night. They were forced into a car and blindfolded. Abioyt tried to stop them by showing his parliamentary identification card, stating that (Article 54) stipulates that no member of the parliament shall be arrested or prosecuted unless his or her immunity is revoked by the legislature. ‘They trashed my identity card and told me to use it as toilet paper’ he recalls. They were driven to an unknown church cemetery out of Addis and told that their graves were already reserved for them. Severely beaten and threatened that they would be executed and buried unless they confessed that they were inciting students in Oromia to rise up against the government, Abiyot says he will never forget the terrifying moment when ‘one of them put the muzzle of his rifle into my mouth while another one poked my stomach with his gun’.

Determined to continue his struggle, he contacted the international media, NGOs and the British embassy to inform them of what had happened. Knowing that his life was in danger, a petition was presented to the federal parliament in a bid to stop the police intimidation; it was rejected. Abiyot could not go anywhere without being followed by the authorities. He could not visit his friends or family because he did not want to put them at risk. He realised that he had no choice but to flee.

It took six months for Abiyot to reach Kenya. He and a friend travelled on foot through the remote forests of the rural highlands in southern Ethiopia to evade the regular police checkpoints on the main highway. ‘Even in Nairobi, we weren’t safe. We were arrested by the security forces, tortured and imprisoned’ he says. With no one else to turn to, he contacted the UN Refugee Agency (UNHCR) and European Parliamentarian, Ana Gomes MEP, for help.

In April 2008, Abiyot arrived safely in Greater Manchester after being granted refugee status. His first few months adjusting to life in the UK came as a shock to him: ‘When you come to a new country, it is the same as being like a new born child again. The impact of a new culture, different language, and different system of employment was a challenge. My qualifications were not accepted in this country’. However, Abiyot did not want to be reliant on welfare benefits and with the support of the pioneering Lorna Young Foundation, his local MP, James Purnell, and assistance from Refugee Action, he established the Oromo Coffee Company (OCC) with other members of the Oromo community in the Northwest. 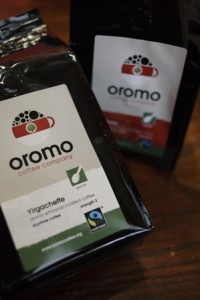 Based on social enterprise principles that ploughs its profits back into creating employment and training opportunities, OCC works towards direct trade between Oromos in Ethiopia and the UK. All its coffee is sourced through the Oromia Coffee Farmers’ Cooperative Union is organic, Fairtrade certified, and expertly roasted in Huddersfield by Bolling Coffee. From spicy Harar, to floral Yirgacheffe and the darkly roasted after-dinner Limu, the OCC has some of the finest Ethiopian coffees covered:

“The Oromo Coffee Company brings a great concept to the world of Fairtrade and we are proud to be working with them. The coffee tastes great, originating from the birthplace of coffee itself in Ethiopia and the mission of the company is taking Fairtrade to the next level”.

Due to graduate in law from Huddersfield University in June this year, the aspiring human rights’ lawyer’s struggle is far from over. He says: ‘Coffee in our society brings people together; it is important socially, culturally and economically. In Oromo culture, people come together under the Odaa tree to make the coffee ceremony and share stories so that we can teach other and manage our lives better. It makes you feel positive and strong. Through the Oromo Coffee Company, we are trading and working together so that we can increase the capacity of the smallholder farmer. This means he can get a fair price so that he can send his children to school and get an education’.

Abiyot passionately believes coffee has the power to change the dire political situation in Ethiopia. More than a commodity, it holds the key to unlocking the vast potential of his country men and women by promoting skills and education through community-to-community trade: ‘If there are no skills or education, we are blind’ he says, ‘only through education can the people know their civic duty to protect and exercise their rights. That’s why coffee and trade has the power to change lives for the better’.

You can be part of that change by supporting the Oromo Coffee Company to help smallholder farmers in Ethiopia earn a decent living here. 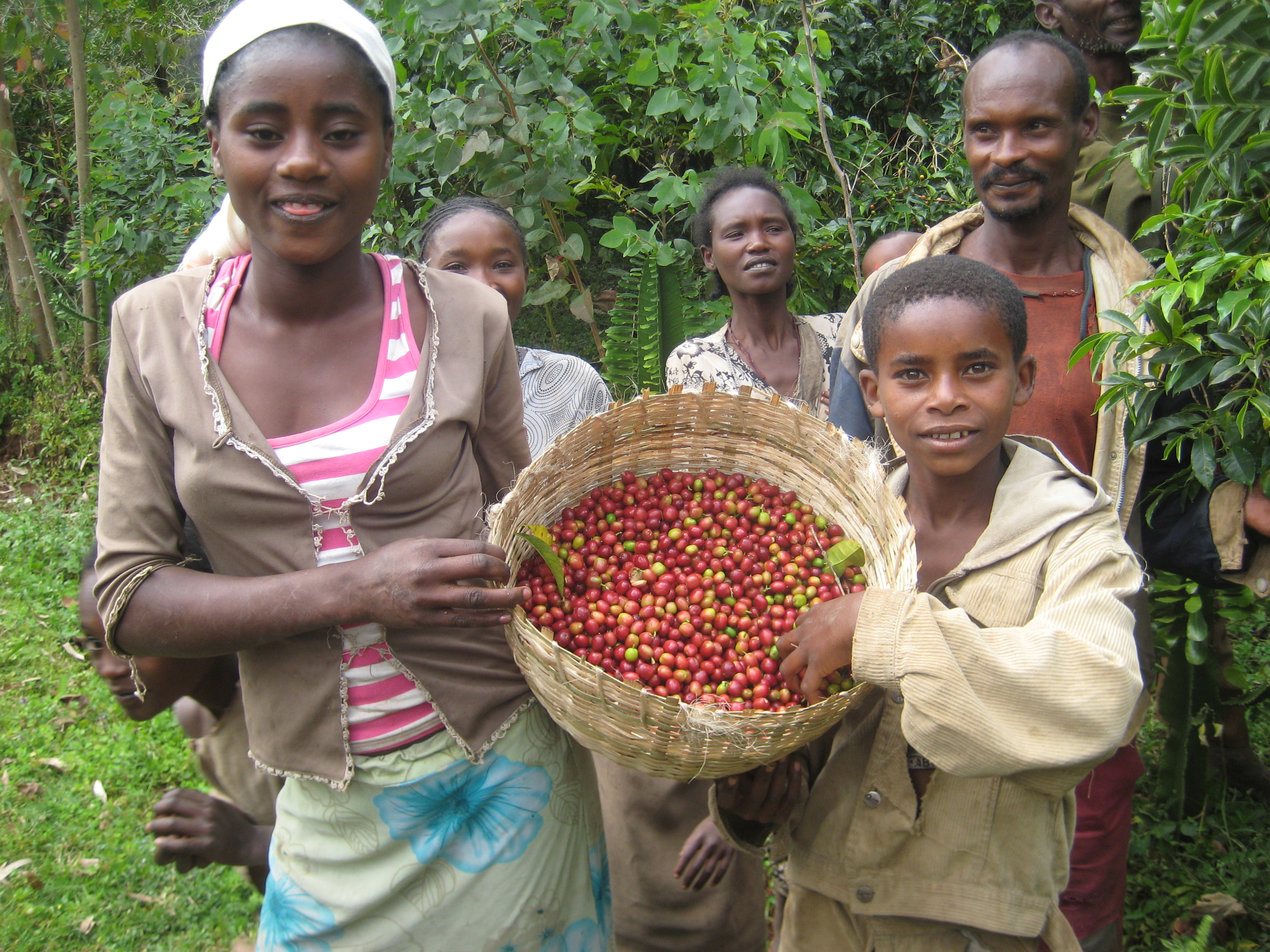