I never thought that I could be so overjoyed at the sight of a strip of tarmac. So overjoyed, in fact, that I wanted to kneel down and kiss its smooth, bitumen-coated surface. This was trumped shortly afterwards by a giant pot of coffee.

After battling through seemingly endless kilometres of ungraded gravel, I finally reached Jimma, the capital of the coffee growing region in the western highlands. In addition to its bold claim to be the origin of coffee; the dusty, chaotic but charming university town is worthy of a visit for many reasons. For one, I can’t think of any other town that can boast of its very own ‘coffee-pot roundabout’. (If anybody knows of existence of another one, I would love to hear from you!) The other is that it serves as one of Ethiopia’s major gateways to the birthplace of the Coffea Arabica bean.

Feeling unashamedly feral due to the fact that I hadn’t properly washed for over a week, it was like reaching an oasis of gentility and sophistication, with the added bonus of a warm shower. The giant jabana merely added a surreal touch of Alice in Wonderland to the whole scenario. To clasp eyes on a great big bulbous pot of coffee complete with ceremonial cups standing serenely in the middle of a roundabout was a welcome sight for any travel-weary, coffee-inspired pilgrim.

If the truth be told, the previous week had been a test of endurance; physically and mentally. To spend eight hours of hard labour on the bike chased by groups of screaming young children, only to check the stats in the evening to learn that you have covered a paltry 40kms, is vexing to say the least. Meanwhile, your body is telling you that it has just cycled four hundred. It’s one of those paradoxical aspects of bike touring where the physiological sensations are at complete odds with the geographical arithmetic.

(I have to make an admission here: The last 80km were actually covered with the Sherpa strapped to the top of an Isuzu after a moment of sheer exasperation at my woeful state of progress. 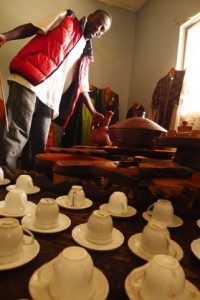 Swallowing my pride – and stubbornness – I threw in the proverbial towel to flag down the next available lift. It took me two hours to cover the same distance in what would have taken me two days on the saddle; one of those very rare occasions where the joys of cycling gave way to the convenience of the combustion engine).

And so after a weekend of rest and recuperation – plus a memorable visit to Jimma’s wonderfully eccentric museum where its energetic guide, Mohammed, drives home the provenance of its haphazardly displayed collections dating back to the reign of King Abba Jiffar (1852-1933) by thrashing them enthusiastically with a cane stick – was all it took to feel like a master of the road again, as opposed to a beast of burden on two wheels.

Putting Rome to one side for a moment, all roads – in my view – lead to the Roundabout of Coffee… 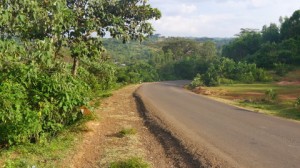 Leaving Jimma’s quirky landmarks behind me, the swift twists and turns of glorious asphalt northwards soon took me deep into coffee-growing territory. Bird-filled canopies of ancient woodland stretched into the distant rolling hills as far as the eye could see. This is ‘wild coffee’, the product of nature’s way rather than the intervention of the farmer’s plough. At the roadside, the brilliant flash of ripe, red cherries, clustered on the coffee trees by the grassy verge was a joyful precursor to the collection and processing of the harvest I was about to witness.