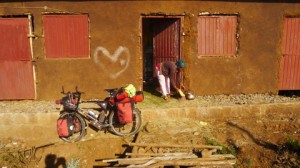 You can understand why King Lalibela wanted to establish his ‘New Jerusulem’ in the back of beyond. Reaching the holy town is a journey in itself. Nearing the final leg of my ‘Tour de Ethiopique’, I set off at daybreak from the junction village of Gashana to get some kilometres behind me before reaching the fabled ‘pista’ that I knew lay in wait before me. Affectionately termed by Ethiopians as a road without tarmac, the ‘pista’ is by all intents and purposes a ‘road’ surface consisting of rubble, volcanic detritus and infinite quantities of dust. Riding it on two wheels is little like skiing without poles; it’s a controlled fall, even uphill. For the first few kilometres, the going was good until the inevitable ‘roughstuff’ kicked in with gusto. Zig-zagging my way through the scree, I went for a tumble a couple of times. 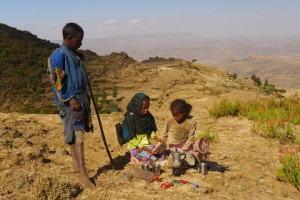 The biggest effort of all was trying to keep my eyes on the road whilst the breathtaking table-top escarpments continually vie for your attention.

After an impromptu espresso stop (100% sun dried Harar Arabica) shared with a young shepherd and his two sisters on their way to school, I realised that I had run out of water. Never a good idea when you’re in the middle of nowhere and the oppressive midday sun is beating down on the rocks like a solar-charged anvil. So, I pressed on in the hope that I would reach a village with a water pump, that works. My map of Ethiopia that I had, by now, become so accustomed to its jaw-dropping inaccuracies (which has led me on wild goose chases in search of ‘ghost towns’ that did not exist on more than one occasion) pointed me in the direction of a river. For once, the map was right. And there was running water; a double bonus. Pulling up, three young shepherds and their father gathered to inspect the bike and proceeded to search for the absent engine as I unpacked the stove for a long-overdue brew.

I was in luck. The father’s fields bestriding the river were ripe with garlic, onion and capsicum peppers: Time for lunch. As I cooked up a slap up pasta over the MSR, the workmen that I had passed further back turned up in their rusting water tanker to refill, bathe and wash their clothes. ‘I’m the grading technician, how do you like the road?’ said one with beaming pride. ‘Smooth’, I replied, daring not to look up from stirring my spaghetti for fear that he would see a glint of untruth in my eyes. ‘In fact, the stretch of pista back there was surfaced with some of the best graded gravel I have experienced in a while’, I added, omitting the fact that my bum had turned completely numb for hours. Gobez! (great), he replied and stripped down to his birthday suit before plunging in to the cool, clear rushing water. As I ate, the three young shepherds came to watch. Not having the heart to continue my lunch, I offered them my concoction which they wolfed down with speed.

The next few moments proved to be surreal as I went on to brew an espresso with my trusty Bialetti for each of the gravel technicians. They lazed in the sun-kissed running waters enjoying their brew, without a thread between them; another of those priceless, unscripted, moments that occurs on the road.

Accounts of shiftas (bandits) started to creep into my mind as the sun banked low in the warm afternoon shimmer. I still had more than half way to go if I was to reach Lalibela by nightfall. Sure enough, the ascents got steadily steeper as I winded my way back up the twists and turns from the valley floor. This also meant that the descents got more treacherous. The gravel technicians clearly have a job on their hands if they’re going to grade this lot, I thought to myself, as the Sherpa bounced and shuddered from loose stone to stone of varying shape and size. The sun continued its inexorable course towards the horizon and by now, hung low in the deep spectrum of the African sky. Flat-topped acacias cast their long shadows across the naturally formed chimneys and minarets that had been carved out of the looming escarpment walls by nature’s hand. They grew with each minute as my leg muscles began to tire. Embracing the hopelessness of my situation, I stopped to watch the sun set in a last final burst of golden light before it sank behind the silhouetted teeth of a fold of mountains that faded into the growing darkness. Night began to close in and Lalibela seemed further away than ever. 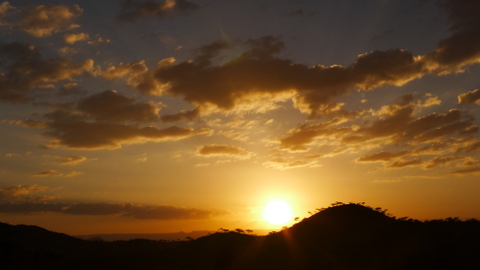 One-by-one, pinpricks of starlight began to appear in the celestial firmament above and I was now being guided by the reassuring glow the Sherpa’s Schmidt front beam. Outlines of young shepherds returning their cattle to the safety of their home ducked and dived in and out of the roadside gloom as I kept my wheels steadfastly turning. Their enthusiastic greetings were an encouragement to redouble my efforts and keep on pedaling. The spectre of shiftas (bandits) which I had been informed by the local police ‘sometimes’ ply their unwelcome trade at night became however an ever-present, intimidating thought. Just as my exhaustion levels and paranoia reached an all time high, the ‘pista’ – by some stroke of luck – gave way to asphalt again, and, buoyed on by my change in fortunes, I pushed on. The distant flickering of fires could be seen burning high up on the escarpment as farmers retreated into the warmth and safety of their mud and straw Tukus for the night. The occasional haunting whoop of the Hyena call echoed across the vast, empty expanse.

Eventually, I reached another village and stopped to pour the last remaining drops of water that I had filtered from the river earlier in the day down the back of my dry, dusty throat. With one last steep climb to tackle, I set off again with one final surge of determination. No sooner had I negotiated my way round the last territorial dog when a voice cried salem! (peace) from behind a row of thorns. ‘Please come inside,’ said the welcoming voice. Too exhausted to enquire further, I took off my cycling mitts, rested the Sherpa against the hedge and followed the voice into the Tuku. In the middle of the candle-lit circular space covered with goat skins was a young woman and her broad-smiling husband who was coaxing their one year-old daughter to sleep. ‘Please, stay and eat’, Endalitch said, offering me a tray of injera and helva (staple Ethiopian food), and a glass full of tella (an alcoholic home-brewed drink made from teff and maize). She returned to the fire at the back of the hut and soon enough, the aromatic smell of roasting coffee emanated from the tray that was placed on the embers. Endalitch stirred the beans gently to the percussive sound of popping and crackling. As I ate, the beans received a forceful pounding into a coarse grind and were placed into the earthenware jabana (coffee pot) which was being licked by the open flames as it rested on the fire. Her husband, Desal, rocked his six-month old daughter lovingly who had now woken to observe the pale-faced visitor with a short wail followed by a long yawn, before falling back asleep. Finally, some etan (incense) was placed on the burning charcoal. The Tuku infused with a warm spicy fragrance as we chatted and drank coffee. After the beureuka (blessing) – or third cup – I could stay awake no longer and retired to my tent, counting my lucky stars. Traditional Ethiopian hospitality, the incredible generosity of the human spirit, and a yeu buna a feulal (coffee ceremony) had, yet again, saved the day. 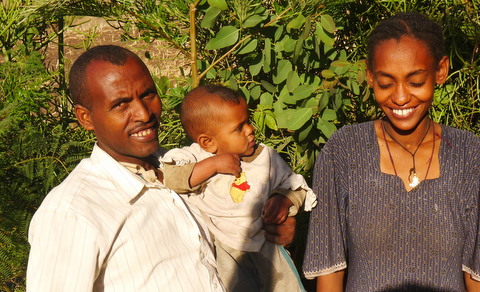