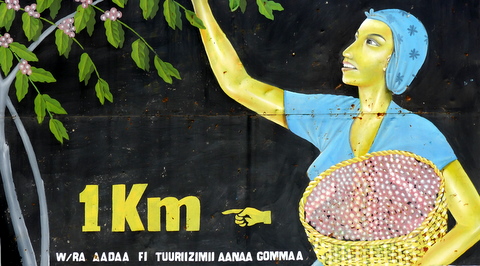 Determined to get to the bottom of the  legend concerning Kaldi and his Dancing Goats, the coffee trail pointed me in the direction of the hallowed ground of Keta Muduga; conveniently situated just a few kilometres away from Choche village. It is said that all those centuries ago, the Abyssinian goat herder took his flock there to graze. The ‘proof’ of the matter can be found in the earth said my guide, Ahmed, who agreed to show me the Arabic ‘inscriptions’ carved into the rock surface that I had heard so much about. He told me how the history of Kaldi had been transmitted down the generations by his forefathers.

Joined by the stoic Bulbulo wet mill foreman, Jerbose, who battled the heat in a lambswool three-piece suit, we strolled passed the patchwork of deep red hues from the coffee cherries that had been  left out to dry on tables before taking a detour to visit to the Choche Primary School’s very own coffee farm. Under the shade trees, kids were enthusiastically helping out with the harvest. Their small fingers were nimbly adept at picking the red coffee cherries. The familiar cry of ‘Choche buna bureadu!’ (beautiful Choche coffee!) could be heard over the excitable hubbub of children playing. In Choche, coffee runs in the blood. 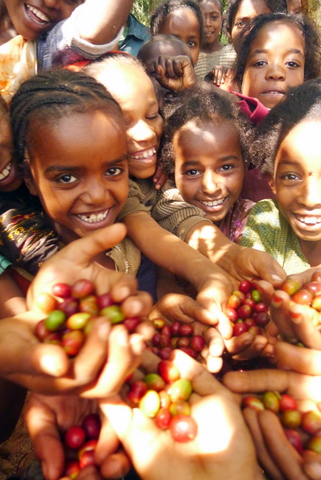 Children are expected to take part in the harvesting activities on the family farm from an early age. Now they were engaged in picking their very own fine organic Choche Primary School coffee cherry, to be later sold to the cooperative. The profits are then returned back to the school to fund the provision of educational materials.

‘It’s a good example of how trade can have a direct and positive impact in the community’, explained the Director of the school, Sisay Akassa, who had kindly given up his afternoon to help translate for me. ‘Most of our students are the children of coffee farmers. Fairtrade helps those farmers get a fair payment for their coffee so that they can improve their living conditions’, he added.

After a steep climb amongst the coffee trees, ducking and diving under branches bursting with red and green cherries, the path eventually led to an open clearing. Tufts of golden grass swayed in the breeze. A natural vantage point, tree-clad hills were set against a hazy horizon all around us. The early afternoon sun beat down mercilessly on the red rocks. A concrete shell of a half constructed guard-house and the octoganel skeleton of a museum (that has remained uncompleted for more than a year due to funds drying up) were the only blight on the scenery. They looked more like crumbling coastline WWII gun batteries than a celebration of coffee. A plaque at the top of the hill reads: 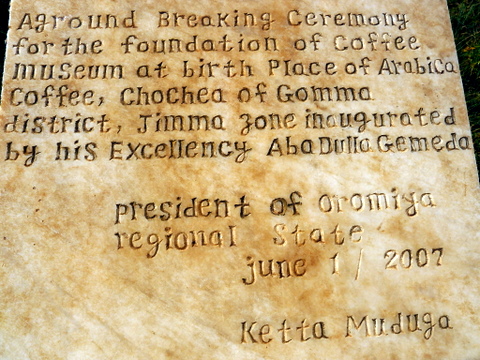 With a spring in his step, Ahmed led us to the start of our story; Kaldi’s very own spot in which to recline and while away the sunny afternoon hours in his chair. I have to say that it really was quite comfortable… for a stone chair. 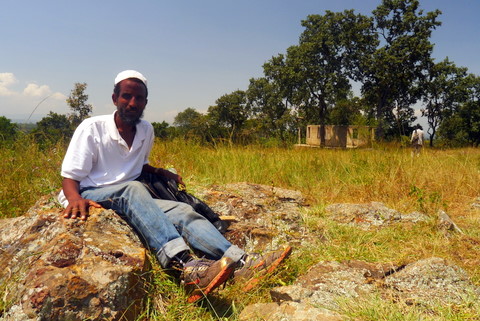 Reclined in Kaldi’s seat, Ahmed, proudly unfolded the events that are believed to have taken place here. He described how Kaldi, a man of artistic pursuasion, had hewn messages into the rocks to remind the world of his important discovery. We next moved to another spot of exposed rock, eroded by the elements. Partly covered by lichen, grass and dry leaves, there are some truly fascinating features to be found, and one-by-one, Ahmed related the significance of each. Here was the evidence presented:

He said there were many more examples but they needed help to fully uncover and conserve the ‘handiwork’ of Kaldi for future generations. Now, here’s the rub… I’m not in the business of stealing anybody’s thunder, such as Ahmed’s was, but I have my reservations. To me, these distinctive features are the work of nature’s hand, not that of a legendary goat herder. Although some of the ‘inscriptions’ do have a striking resemblance, they are to my eyes, forged through unimaginable metamorphic forces in the melting pot that was Ethiopia millions of years ago.

But where were the Arabic inscriptions?

Anticipating this moment for a while now, I somehow expected to find ancient Arabic script that had been carved into the rocks containing early references to coffee and the trade links that the old Ethiopian kingdoms enjoyed with the Persians and Arabs. This was to be the defining moment I had been waiting for – to see for my own eyes a a small piece in the great jigsaw puzzle that is the history of the bean and how it went on to conquer the world. But, like life itself, what you look for isn’t necessarily what you find. For one, my own expectations were far to literal. In fact, what I found at Keta Muduga was evidence of something deeper, far richer, and much more profound. In that special clearing surrounded by miles of coffee forest, I had been privileged to witness a proud and passionate claim that this was the work of Kaldi and hence the birthplace of coffee, just as the coffee forest that surrounded us is. Surveying the landscape, I felt like I was standing on a giant, elaborate storyboard that connected Ahmed like an umbilical cord through the past to his ancestral heritage.

Surely this was also an example of early ‘coffee culture’ long before the macchiato or tall-skinny latte was ever dreamed up? In those sun-kissed rocks was a communities’ burning desire to tell their story to a wider world about the origin of coffee, and their place in it. And the overriding message rang loud and clear; coffee is as old as time memorial.

Winding our way back, we stopped to speak to Kalifa and Rida who were collecting the fruit in handwoven straw baskets. Two of them were brimming full of bright red berries already. 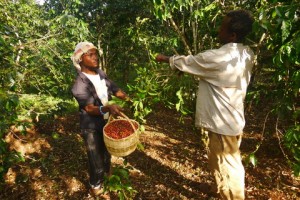 A few kilometres further and we came across the Institute of Biodiversity Conservation (Choche Coffee Field Gene Bank), a government body dedicated to protecting the country’s biodiversity. Inside its 41 hectares it houses – at the last count – 4898 different strains of the coffee Arabica genus discovered in Ethiopia alone. The Manager of the Field Gene Bank, Jara Negash, had this to say: ‘More strains are being found each year. Genetically speaking, Ethiopia has the most diversified varieties of coffee types to be found anywhere in the world. We have only just scratched the surface.’ 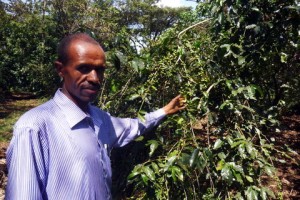 A tour of the carefully tended nursery beds revealed the marked difference in the foliage and fruit of each strain (there are largely two main groups in Ethiopia; Bourbon and Typica varieties). Planted in neat rows, the beds contain samples of the bean in various stages of development from young sapling through to mature tree. It was like walking through a living open-air museum; breathing, fruiting proof of the incredible genetic diversity of the genus coffea Arabica. Heart warming also to see the important role that the gene bank plays in conserving a unique part of Ethiopia’s rich national heritage – and indeed the world – for generations to come. 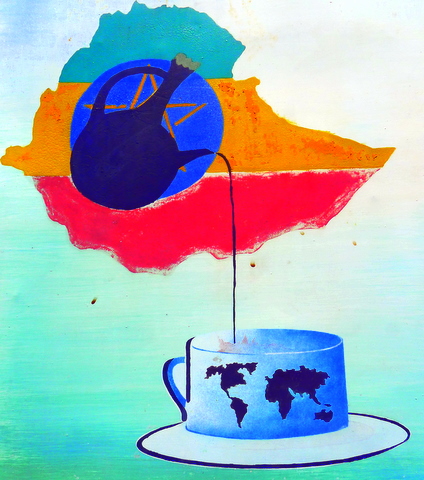 Energy levels flagging, Ahmed, Jerbose, Sisay and I headed off in search of a brew of the Choche nectar in one of its many Buna Bets (coffee houses). As we sipped and savoured a refreshing cup of coffee, Ahmed turned to me and said: `We have the evidence that explains the origin of coffee but we don’t have the support or materials in which to tell our story. Kaldi was a learned person who wanted to show how Choche gave coffee to the world. Go back to your country and help us to tell the history of the origin of coffee. This is coffee Arabica. Ethiopia’s gift to the world’.

Disclaimer: It is  important to mention at this point that another place rivals Choche as the birthplace of coffee. Found in the vast wild coffee forests that characterise the Kaffa region just 150kms away, it is claimed that Mankira village near the town of Bonga is the true origin. A manifestation of the growing regional rivalry (Choche is in the state of Oromiya whilst Mankira lies just across the border in Kaffa. Both were considered to be in the same region of Kaffa until forty years ago when the boundaries were redrawn) is that both states are now locked in a cultural arms-race to build their own respective coffee museums, evidently with questionable progress so far. Of course I would not wish to offend anyone’s sensibilities, pride or rightful sense of heritage. There is validity to both claims, because they are both right. When you boil it right down, it is Ethiopia that is undisputedly the world’s cradle of coffee, and that’s good enough for me.