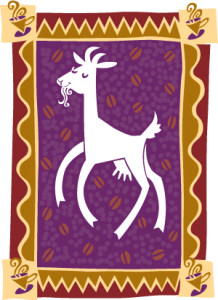 It is told that the rejuvenating and stimulating effects of the coffee bean plant were first discovered in Ethiopia by an Abyssinian goat herder, named Kaldi, back in the 9th century.

One day, while Kaldi was tending to his goats, he grew tired and decided to take a quick nap. He later awoke to find his goats dancing gleefully around him.

Kaldi decided to investigate what was causing his goats to behave so energetically. Following them, he was led to a certain bush that produced an abundance of bright red, yellow and green berries.

After tasting a small handful, Kaldi began to experience a similar elation that he had observed in his goats earlier that day. He took them back to his village and presented the berries to the village elder in a state of excitement. The elder, skeptical of Kaldi’s discovery, threw them into the fire. Minutes later, a rich enticing aroma filled the air. The roasted beans were quickly raked from the embers of the fire, ground up, and placed into a bowl of steaming hot water.

And so legend has it, that high up in the in the Ethiopian province of Kaffa many centuries ago, the world’s first cup of coffee was made. The rest, as they say, is history.