You know you’re getting off the beaten track because the faranji frenzy turns into pure highland hysteria. If you could bottle it, it would be strong, potent stuff. The more ‘off-piste’ you go, the more hysterical the children. It’s an overwhelming,  psychologically challenging, at times hilarious, often surreal, deeply moving, endlessly entertaining experience; especially the bizarre sight of young boys jigging about whilst shaking their ‘moneymaker’ for all it’s worth on the dusty roadside verge.

Following on from an account in a previous post, here is the latest abridged version of the perpetual roadside chorus that has accompanied my ‘Tour de Ethiopique’ wherever I go:

Habasha (Ethiopian): High, high, highland, highlaaaaaaaannnnd!
Faranji on a Bike (foreigner): Habasha!
Habasha: Money, money money… give us the money!
Faranji: Sorry, no Birr. [I don’t give money to children for obvious reasons]
Habasha: You, white man, are you sure?
Faranji: Positive.
Habasha: Bag, bag, give me one bag!
Faranji: Any particular pannier that you would like?
Habasha: Highlaaaaaaaand! Where you go?
Faranji: Up that mother of all hills…. [To add to the growing list, other interchangeable destinations have included Chester Zoo, Gretna Green, the Hanging Gardens of Babylon, and to the ‘stomping ground’ of Kaldi the Goatherder]
Habasha: [Pointing at the open space in the bike frame] Oh my god, where is the machine?
Faranji: Engine yellum. [Amharic for ‘there isn’t’].
Habasha: Lemin? [Amharic for ‘why?’]
Faranji: Pedal power is all you need.
Habasha: What are you doing?
Faranji: Cycling to the birthplace of Buna [coffee].
Habasha: Bravo! You are guest in my country, now give me your bike!
Faranji: Of course, can you give it a service as well?

And the most perplexing so far…

Habasha: Are you Jesus?

Although I’m accustomed to the rather predictable repétoire by now, this roadside réposte totally floored me. It’s not that I’m suggesting that Jesus neglected his sartorial duties in the holy beard maintenance department, but I’ve put it down to the fact that my growing facial fungus is now starting to resemble a rather unkept hedgerow.

The other sign of getting off the beaten track is the flip side to highland hysteria. For the sake of this post, let’s call it ‘faranji fear’ (or loathing). This quickly became apparent as I crossed the mighty Great Rift Valley in the culturally and ethnically diverse Southern Nations, Nationalities and Peoples region that borders the Kenyan border. In short, it amounted to a 110km stretch of ungraded gravel and volcanic rubble. 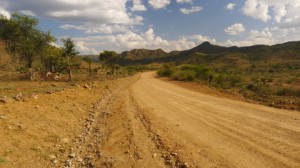 Still, the  spectacular scenery and rich array of wildlife was enough to keep me sufficiently distracted from the fact that my hands and derriér had turned completely numb from the continual battering they and the poor Sherpa were receiving from the ‘rough stuff.’ (As my 84 year-old grandfather ‘Harry The Bike’ would affectionately call it. You can read more about his weekly exploits on two wheels as he leads the esteemed Watson Wanderers’ Tuesday ride around the byways, highways and rough stuff of NW England/Wales on his blog here. Long live the Roughstuff Fellowship!).

Along this remote stretch, the only presence of tourists are from behind the tinted glass of Land Cruisers that trail a large swirling cloud of fine red dust as they roar passed. And then there is the faranji fear and loathing-inducing Rotel Tours mobile. Now, the first time I saw one of these bright red beasts, I honestly thought I was hallucinating from sunstroke.

Basically, the Rotel Tours mobile takes the form of a large HGV-cum-B&B, complete with upper ‘observation deck’, converted to carry up to twenty SLR-armed tourists. It even contains bunk beds at the back just in case you get tired of watching the ‘local curiosities’ and fancy a snooze. It’s the equivalent of the kind of fun ride that you would expect to see in a theme park. Except the ‘theme park’ is far from make-believe. In effect, the Yabello Wildlife Sanctuary has by its very presence been turned into an open human zoo. The spectacle of pasty-looking tourists taking pictures of the locals without consent from the ‘intrepid’ confines of their ‘articulated armchair’ made my heart sink; a vulgar example of just how culturally insensitive some manifestations of mass tourism can be.

‘Are you with them?’ I was gingerly asked by one elderly chap as he turned his back to the monstrous juggernaut as it rumbled passed, bristling with paparazzi-style telephoto lenses. ‘No’ I replied, shaking my head in dismay and disbelief. He didn’t even say a word in response, just smiled and shook my hand firmly before leading his grandson back through the low entrance of the family hut, out of sight and earshot of the rapid fire of lens shutters and digital AF beeps. His silence spoke volumes. As much as the rolling Rotel Tours mobile struck fear and loathing into my own heart – I dread to think what the locals thought of it and the perception they have formed of foreigners.

I admit that I am equally guilty as charged for unintentionally causing my own fair share of faranji fear. Young shepherds who are tasked with the huge responsibility of looking after the family herd or groups of tall, slender – always giggling and smiling – young women wearing the most vibrantly colourful shawls and sporting amazingly intricate hairstyles platted with patterns of beads would stop and turn abruptly as I slowly approached. Whether it was the unfamiliar sight of a heavily laden touring bike or the faranji at the helm sweating through countless layers of sun block whilst deep in concentration trying to keep the Sherpa going in a relatively straight direction, I will never know. But the response was consistently the same as they quickly dived for cover into the hardy shrubs and giant Aloes at the roadside. Only until I passed with a wave  to signal I was more friend than foe, would they emerge, with startled looking expressions before bursting into fits of laughter. Quite frankly, I don’t blame them. In many ways I looked just as out-of-place as a Rotel Tour. On reflection, I’m sure I must have looked like some strange apparition with streaks of sweat-lined lotion running down my face as I pedalled passed at a bone crunching rate of 5 km/h. More ghost on a bike, than bean. It is then that the tables are refreshingly turned and within seconds their mobile phones were trained on me as I bounced over the rubble from one pothole to the next.

Maybe it was a largely due to a strong desire to notch up my first wild camp in Ethiopia because it transpired that I had no choice but to find refuge under the canvas that night. This was in part due to a rare torrential downpour that turned the rough road into a river of red mud.

(Tragically, the rains in the region have failed for a second year running and the telltale signs of water stress and drought are everywhere; the cracked earth of dry riverbeds, dead carcasses of animals on the roadside, fields prepared but no healthy green crops growing, the heart wrenching sight of malnutritioned children, widespread soil erosion, abandoned homes, the sad and sorry list goes on… Despite this, many aid international agencies are active in the area – including the charity Water Aid who I am raising funds for – to help prevent further needless suffering and improve lives with deep well, irrigation and sanitation projects). 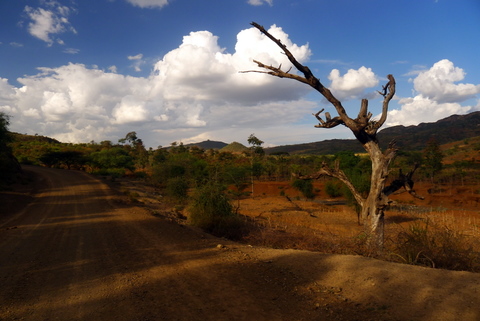 Yet again, the chunky tread of the Schwalbe Marathon Extremes did what they said on the can and with characteristic herculean grip, managed to throw mud into every nook and cranny of the Sherpa with a the force of a thousand spades until my wheels eventually jammed and would turn no more. It was a timely cue for my first Ethiopian stealth camp in the wild. Fortunately, the rain clouds cleared to reveal the majestic African night sky as the celestial white band of the Milky Way arched its long back around a luminous waxing moon. Having got the tent up with time to spare for a hearty meal of pasta and tomato puree generously seasoned with some local spices to give it some much-needed kick, I tucked into my sleeping bag in anticipation of a deep sleep. No chance. Within minutes, the blood-curdling cries of Hyenas could be heard calling to each other in the far distance; presumably coordinating yet another nightly attempt on a raid of the local livestock.

In fact, these powerful nocturnal predators are so feared by the locals that it is widely believed that they are actually the spirits of young men who have taken the form of a Hyena to hunt and run with the pack during the hours of darkness. The only proviso is that they are forbidden to eat human flesh. An Ethiopian version of a Gothic vampire, if you like. Despite my aching legs and exhausted mind, my senses were on high alert and refused any onset of restorative sleep. It turned out to be a long night as my imagination ran wild to the howls of the Hyena and sound of wildlife as they went about their night-time activities, peppered with the occasional gunshot. A spine-tingling experience that was only tempered by the comforting rhythmic sound of drums and singing that softly padded through the cool night air from the village nearby. At daybreak, I managed to pack up after catching only a few precious hours of restless sleep in the half light of morning. Miraculously, I managed a lightening-quick brew with lashings of honey without being rumbled by raising my first ‘faranji alarm’ of the day. Truly a miracle. 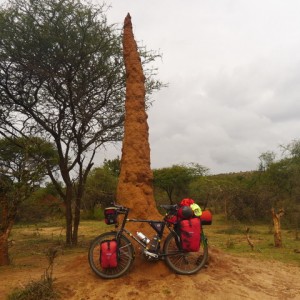 Needless to say, the going was painfully slow and it took me two full days to cover a mere 100km. This did however allow me to enjoy the sweeping vista as the land opened out into wide open savannah dotted with massive termite mounds, sometimes as high a double-decker bus. Camels loafed about in the shade of the acacias with their toothy, slightly haughty expression. Large groups of Gibbon Monkeys would mooch around the roadside and allowed me to get surprisingly close before they set off together into the scrub and towards the safety of a treetop. Humming birds and butterflies fluttered from the few flowers that had blossomed as Grass Snakes or Lizards basked on the warm rocks. Occasionally, young gazelles and their mother would leap across the road with incredible elegance – as if for the sheer joy of it – and because they can. I am still yet to spot my first predator of the feline kind that is reputed to roam the coffee forests further to the north however, before it spots me. 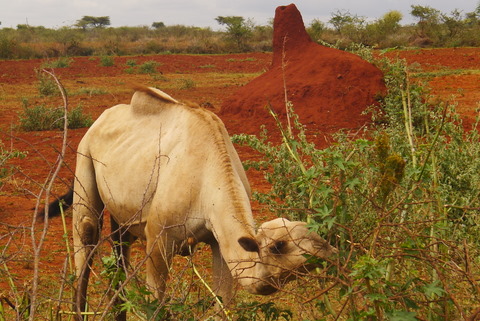 The generosity of the locals has been a humbling experience. Despite the daily hardships they face, I’ve been offered maize, fruit, coffee, precious supplies of water and invited to freely camp amongst the enset and orange trees. Highland hysteria aside, I’ve received exceptional highland hospitality as I edge closer to the birthplace of coffee.

Next stop on this blog: the Choche Coffee Farmer’s Cooperative where I’ll be helping out with the washing of the red cherries on one of their wet mill stations in the western highlands. The annual Ethiopian coffee harvest of 2011/12 has begun in earnest… Time to get my skates on. 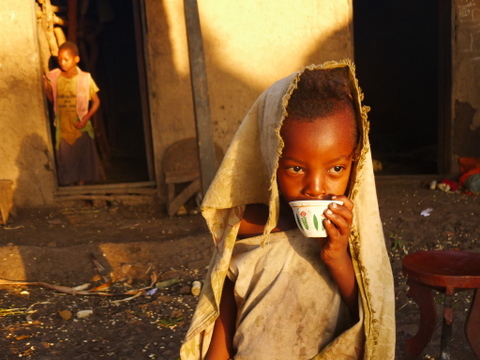