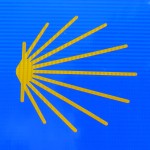 It has taken a while but the bean is back on the bike – this time to follow ‘El Camino’ (also known as The Way of St James) across the Iberian Peninsula towards Santiago de Compostela.

My original intention has been to update the blog as I go; to write about the exhilarating highs and occasional lows of cycle touring, or the elemental experience of wild camping across the diverse patchwork of regions that make up northern Spain. Yet, I’ve not been able to commit the words to the page until now. It’s partly because I’ve wanted to resist the compulsion to write and be in search of the next available wi-fi zone to publish another update. But more than that, I’ve wanted to allow the gentle rhythms of nature to take over so that the need to be in, or have access to, instant communication day or night via digital means becomes merely a possibility, rather than a necessity. And it is this desire to, well, coin the old cliché – to ‘turn off’ and ‘tune in’ – that has helped to shape the journey along the Camino de Santiago so far. The only dropping out, however, is the chain on the trusty Sherpa from time-to-time. 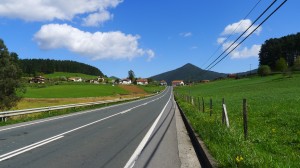 Arriving in Bilbao after an unusually smooth crossing by ferry across the Bay of Biscay from Portsmouth, England, I decide to get the leg muscles back into shape by tracking the coastline along the Costa Verde towards France. This was with a view to joining the Camino on the French side of the border at the popular starting point of Saint Jean-Pied-de-Port and then back into Spain across the hinterlands of the Pyrenees to ‘officially’ start my pilgrimage from the monastery at Roncesvalles. Although I appreciate it may seem counter-intuitive to head completely in the opposite direction of Santiago de Compostela, it turned out be a good decision. The legs, as expected, were painstakingly out of shape and despite the forgiving ride of the steel-framed Sherpa, a serious amount of necessary weight needed to be jettisoned before the fully laden bike felt more like its sprightly former self than I had been accustomed to on my last cycle tour to the birthplace of coffee, Ethiopia. 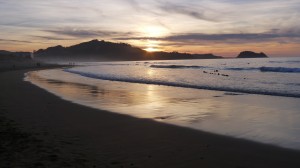 Punctuated by some cracking wild camp spots en-route, the crimson sunsets along the Costa Verde as the sun plunged into the deep blue waters each evening was the perfect reward for the succession of punishing hills that I encountered each day. In fact, I was actually reluctant to leave the undulating coastline to head inland from the combed white sands of St-Jean-de-Luz; but the Camino was calling and I needed to reply. Thankfully, the legs responded too and I soon got into my stride on the Sherpa, stopping off for the occasional refreshing natural cider poured at a height – to achieve that perfect effervescence that is so characteristic of the Basque outlook on life – as I cycled through the verdant rolling farmland that straddles each side of the western Spanish/French frontier.

I met my first pilgrim, Maria from Austria, on the winding climb up from Arnéguy before the swift descent into Roncesvalles. We stopped for a chat under the baking hot midday sun. It turns out that she was a tour guide who decided to take some time out from the demands of her work and be on the other side of the tourist fence for once. She was the first of many Maria’s and Mary’s that I would meet on the road. Fortunately, I was allowed to camp in the monastery grounds of free of charge with the helpful advice that I should present my newly acquired Credencial del Peregrino (Pilgrim’s Passport) to the officer of the Guardia Civil if they turn up to enquire why I had chosen to sleep in a tent rather than take advantage of the accommodation provided by good folk at the monastery.

I appreciate that to some folk it seems an odd choice to decline the offer of the warm bed for the night for the confines of a cosy tent. But my decision to wild camp my way along the Camino has been not only born out of reasons of self-imposed financial austerity but for the very fact that it’s the sheer joy of getting off the beaten track and being as self-sufficient as possible. The mitigating factor is that if I am going to carry a nylon home and all the associated paraphernalia that goes with it; I might as well use it. 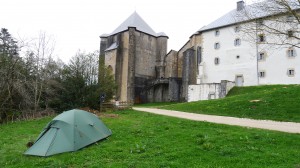 That night, the weather changed dramatically and the familiar brilliance of the milky way and waxing moon became shrouded in a swirl of storm clouds. The thunder and lightning display that ensued was a dramatic start to my journey along this ancient pilgrimage route that has experienced a huge resurgence in popularity in recent years.

El Camino de Santiago – also known as Camino Francés across the border – is essentially a collection of established walking routes that fan across Europe and converge on the shrine of the Apostle of St James in the Cathedral at Santiago de Compostela. Legend has it that the apostle journeyed to the Iberian Peninsula after Jesus’ death on a mission to spread Christianity amongst the Pagans. On his return to the Holy Land, he met an unfortunate end and was martyred by the sword of King Herod in Jerusalem. His decapitated body was said to have been taken by his followers to Jaffa where a stone boat was commissioned. Miraculously, the boat floated and after seven days at sea, the boat was washed up in a great storm, undamaged and covered in scallop shells, at Padrón. After some deliberation with the local chiefs, his body was allowed to go to the earth in Spanish soil in a tomb 20km inland from the Galician coast. 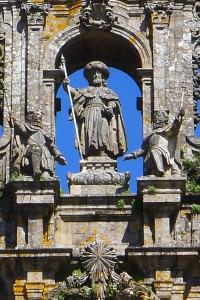 For more than 800 years, his resting place was undisturbed until a shepherd called Pelayo was led to a bright star shining in a field where the body of James the Apostle and his followers were discovered. It is from the field (campos) of the stars (stella) of Saint James (Sant Iago), that the name Santiago de Compostela is derived.

Not long afterwards, Alfonso II – the King of Asturias – declared St James the patron saint of Spain after there were reported visions of him leading the charge in shining armour on a white horse against the Moorish invaders, earning him the title ‘Santiago Matamoros’ – or St James the Moor Slayer. A church and monastery were built over the tomb in recognition of his decisive interventions that turned the tide in battle against the advancing Islamic army, and so the illustrious history of Santiago de Compostela began. Steeped in myth and the mists of time, the Crusades and reconquesta of Catholic Spain had finally found a patron; the Golden Legend was born, and the pilgrimage routes that we know today across Europe have been a magnet for pilgrims far and wide.

Legend, historical and religious complexities aside, the question concerning why people embark on a pilgrimage of their own is a fascinating one. My own personal motivations for cycling along one of the major sections of the Camino that follows an ancient Roman trading route to the Atlantic is not for religious reasons – but neither do I discount the fact that, for many, it is a journey of great religious importance. 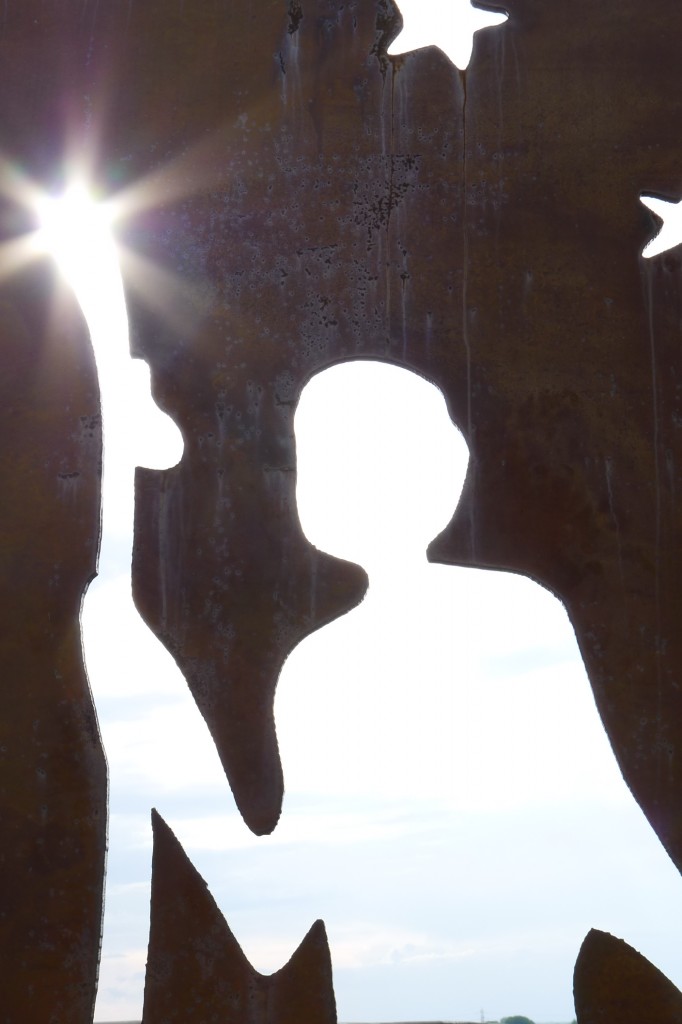 I suppose it is partly down to a desire to slow down and reconnect with nature; to be ‘still’ again and to fully appreciate the moment, away from the perpetual distractions of modern-day life. Another dimension has been to allow the soul, body, and mind to experience the freedom of the open road again; unheeded, unhurried and most of all, to be at peace in an increasingly chaotic and conflicted world. I’ve also keen to discover the myriad of reasons why others have decided to make time to make their own pilgrimage to Santiago de Compostela, and how, the experience has, if at all, profoundly changed them.