Reverse parking a 10,000 tonne vessel is clearly not for the feint-heated when it comes to docking in the industrial Port of Tripoli (not to be confused with Libya!). Think more Camel Lairds shipping yard in Birkenhead cum-fishing jetty bristling with vast cranes and pulley systems than your average looking ferry terminal. It took a good hour for the captain to turn the boat round and slowly manoeuvre it to within a lifebuoys throw of the dockside. Finally, two tugboats – freshly painted in the colours of the Lebanese flag (green, white and red) –

came to the captain’s aid and gently nudged the ferry between two huge container ships being loaded with scrap metal; with only a few metres to spare on each side.

As we dropped anchor, a fellow passenger wryly shouted the – soon to be familiar – refrain ‘Welcome to Lebanon!’ over the pitch of the engines as they struggled to bring the Azzurra’s (Kingstown) rusting hull to a complete standstill. His son leaned lazily against the railings beside him and gazed back out towards the Mediterranean horizon with a plastic toy Kalashnikov slung round his neck. He was all of ten years of age. 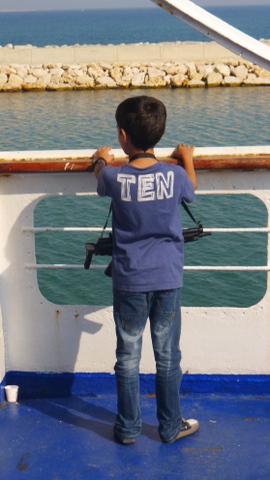 A head-splitting mix of the sound of grinding metal, dust and oil fumes filled the heavy air as the sun beat down on the luggage strewn deck as we patiently waited to disembark. I whiled away the time chatting with three friendly Harley Davidson die-hards (Moustofa, Labib and Ghason) whom I had met on the overnight journey from Turkey. Two sweltering hours later, my passport was finally stamped after some careful scrutiny by the khaki-clad customs officials and I was eventually allowed to step back onto Terra Firma once again.

Passing through customs with a touring bike is always an interesting affair. I’m still not sure as to whether you have to ‘declare’ a bike or not under international maritime law? The captain of the ship didn’t seem to know either. The same confusion applies when you’re confronted with a scanning machine. Essentially a large microwave on steroids, these machines are roomy but they don’t have the capacity to scan a fully-laden bike. Even the customs officials, no matter how officious looking, don’t seem to have the inclination or time on their hands to ask me to unpack the bike for a full bag search. On every occasion so far (and Tripoli was no exception), I’ve been greeted with a dismayed look that says ‘what on earth do you expect me to do with this?’ shortly followed by the unavoidable question ‘what’s in your bags?’ Always starting with a deep breath before I begin, the first item to mention in the long litany of items is the camping stove as I reckon that this helps to explain the large array of paraphernalia that accompanies a healthy obsession with coffee. To date, I still haven’t yet managed to get passed item number five yet (Turkish coffee pot) an 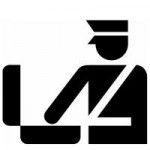 d its corresponding gesture in the universal language of mime before I get interrupted with an incredulous look and a resigned ushering of the hand to wave me on. This is usually my cue to bypass the bag and body scanner completely as flustered passengers are made to cue up and empty the contents of their bags for closer inspection. It’s a fast track through customs purely on account of the fact that there does not seem to be any protocol or convention for scanning a touring bike. For all customs know, I could be smuggling coffee beans into the country concealed inside my bike frame… Which of course technically-speaking, I am.

I was questioned on three separate occasions as to the contents of my panniers at successive army check points (and three equally thwarted attempts to conduct a bag search) on my way through before leaving the confines of the heavily militarized port. I was finally in Lebanon at long last and the much-anticipated flavours, and sensations, of Arabic Coffee beckoned. 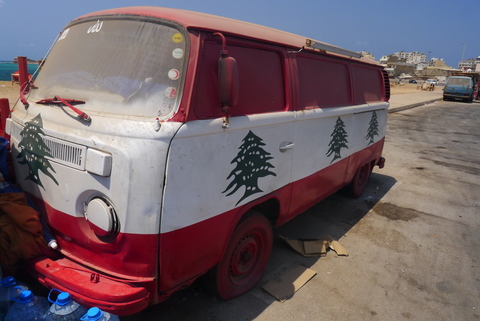